I know I said I wasn’t going to do these the rest of the time I’m in Florida, but there is just too much I want to tell you all about our adventures… At least there was a vlog to break things up a bit on Wednesday?

I’ll keep this post as short and sweet as possible by doing it Thinking Out Loud style (i.e. a numbered list)!

1) A few days ago, coming back from the outlet mall, we came across this little guy struggling on the side of the road in our neighborhood:

I’ll name him Squirt in honor of Finding Nemo.

We pulled over to take a picture of him, but we didn’t know what to do with him. Then a dude in sunglasses drove up, picked up the turtle, and put him back into the lake without saying anything, even though we were trying to ask questions. Then he drove back to where he came from. #iGuessSo.

2) Daliza and I went mini-golfing on Wednesday evening!

I won, but that’s not saying too much since that was Daliza’s first time playing. I’ve even played at this course before and I got a double bogey (two more strokes than par) on the FIRST HOLE.

I also fell on my butt somewhere, somehow during our game, but that’s not important…

3) Wednesday night was lovely and relaxing with a dinner of pork/veggie spring rolls made by mom and movie night. Daliza and I watched Heaven is For Real (the movie based off of my favorite book) finally, and it was pretty good! The book was better though, of course. 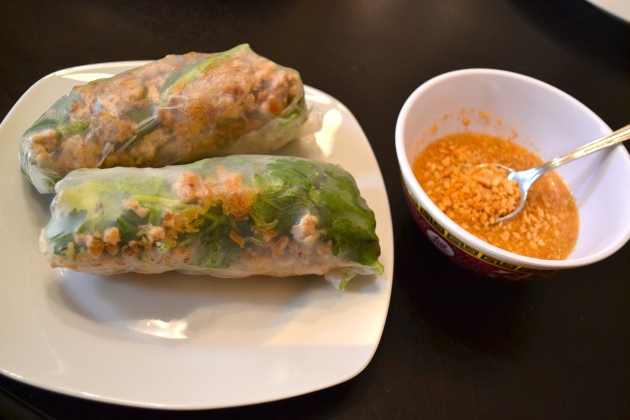 4) Daliza and I spent a whopping 13 hours in Universal Studios/Islands of Adventure yesterday. My feet hated me. But we knocked out more than 12 rides and attractions, I believe! Go hard or go home (literally). Now, for all you Harry Potter fans (ARMAN):

5) Daliza was totally awe-inspired by the Harry Potter sections of the parks, and I thought it was pretty fantastic too. But I’ve never read Harry Potter, and I’ve only watched a couple of the movies, so I wasn’t quite as ecstatic as she was. This is why:

Is he not so scary?

6) There was never a moment in the day during which I didn’t feel soaked. It was either water from a ride or just plain sweat. So nasty. It’s all a part of the experience though, right?

7) The lines were not terribly long! Glad we didn’t waste $100 on an express pass. Oof.

8) I was in a breakfast rut during this vacation until this morning. I was in the mood for some doughy, creamy grains, but I didn’t make overnight oats last night. So I used the brown rice mom had made earlier this week for a peanut butter banana rice pudding of sorts.

Wow, it was delicious. I hadn’t made a breakfast rice bowl like this in a while. I tweaked this recipe a bit:

Put all these ingredients in a bowl and microwave for 1-1.5 minutes. Mix well until the peanut butter and banana are combined with the rice and the milk is absorbed. Top with dollops of plain Greek yogurt and maple syrup. DIG IN.

9) We’re going to a concert tonight! It’s a husband and wife duo called Us The Duo. Daliza actually introduced me to the group just two days ago, but I’ve been doing my job as a fangirl by listening to their music nonstop. If you like Colbie Caillat, Tori Kelly, Ingrid Michaelson or any other singer-songwriters like that, you’ll love these two. They’re adorable.

10) I think I’m gonna do some yoga now. Have a wonderful weekend, friends!

Are you good at mini-golf?

Are you a Harry Potter fan?

Ever eaten rice for breakfast?

Ever heard of Us The Duo?