They don’t kid when they say Ireland is green. 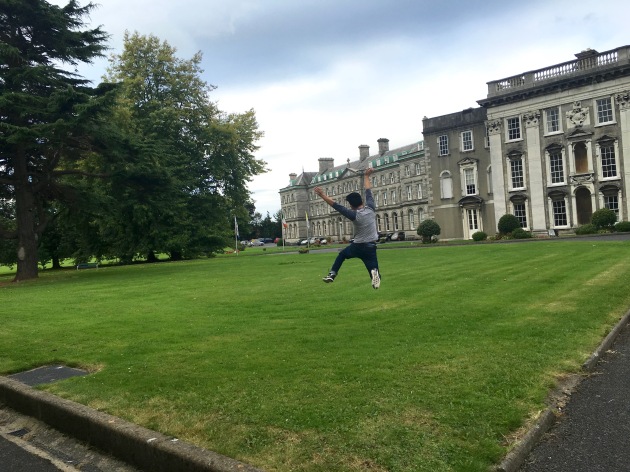 this is my friend, Kevin, loving life

I’m here in Dublin!! My red eye flight on Aer Lingus was pleasant and a lot quicker than I imagined it would be. Sitting for 6+ hours still made my legs want to shrivel up and fall off, but at least I got to sleep and eat the good airplane food (← never thought I’d say that!).

I listened to the inflight music selection, which included Adele, Ben Howard, and “Irish Pulse”. I did not actually listen to Irish Pulse, but I wish I did in retrospect. Like, electro-Celtic perhaps?

‘Twas especially sunny in Dublin when we arrived on Tuesday morning, which helped us to feel more alive after traveling overnight.

"The red car is ruining the aesthetic." The grass is truly greener on this side! #DublinMovesAndGrooves #madeit

We also got a mini sweat session just by hauling our 50+lb. luggages around the airport, on and off the bus, and up a couple flights of stairs.

Our campus is gorgeous! 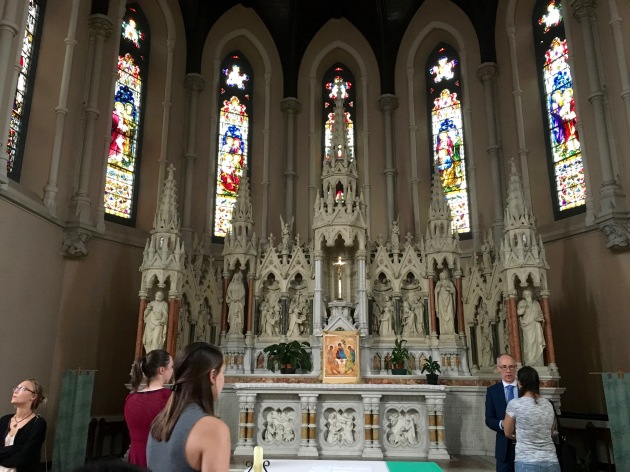 We had our information and orientation sessions, with a much-needed lunch in between at their dining hall.

There really are lots of potatoes here. The dining halls serve them both mashed and roasted/fried. I can deal with that.

But since we have a nice kitchen in our dorm, we’ll all be cooking throughout the semester (yay!). We went to the grocery store in the afternoon, and I got two huge bags of groceries. Most people only bought one bag, and one girl told me, “You went HAM in there.”

Listen, I am good to go with what I have, and I only spent 60 euros for a lot of food + staples that will last a while. I’ll take “HAM” as a compliment.

I have yet to drink any booze here yet. My friends at home are probably screaming at me right now, but I just haven’t yet! I’m definitely planning on going out for some drinks and having some Irish whiskey, don’t worry. I just…napped through the first night when people went out to a pub for dinner. Whoops.

Post nap: “I don’t know where the heck everyone is but I got dressed up anyway.”

I conked out at 5pm and slept through my 5:35 alarm until 7:40. I wasn’t mad about it, but dinner was a little weird, since I was lazy and not too hungry.

spinach and (fantastic!) tomatoes with hummus

Our wifi doesn’t work in the dorms yet, so I went outside in front of another building to FaceTime Madre and do some other internet things before heading to bed at around midnight.

I wanted to move and groove yesterday morning, so I put on my gear and went outside to find a potential spot to work out, but there were too many people walking outside, and I didn’t want to be weird, so I just did an indoor HIIT workout.

{side note: I’m typing this in a sketchy dark corner outside to get wifi, and there’s a friendly man who keeps walking by, and I don’t know if he wants me to leave or not, but I’ll just stay until he kicks me off this bench}

Pre-workout breakfast (since I was a little hungry when I woke up) was a banana and more toast with another knob of kerrygold butter from the airplane packet.

Post-workout breakfast was Greek-style Irish yogurt, which was a little thinner than what I’m used to, but still very good! I had it with raspberry preserves and peanut butter that my new friend lent me, since Madre is actually visiting this weekend and bringing me all my peanut butter then 😀 #spoiled. 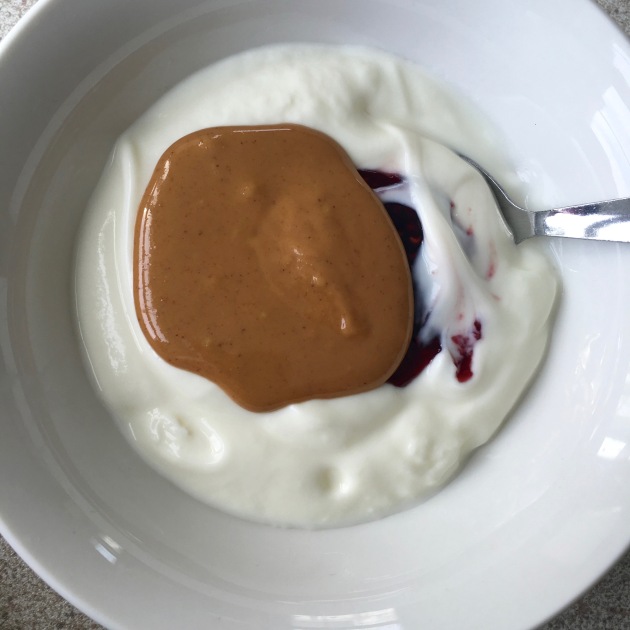 We had more touring and orientation things until 1 pm, when I was READY for lunch.

We ate at a dining hall again since we weren’t anywhere close to our dorms. This whole plate was only 5.50 euros, and it was everything I needed. Simple, tasty, and filling. 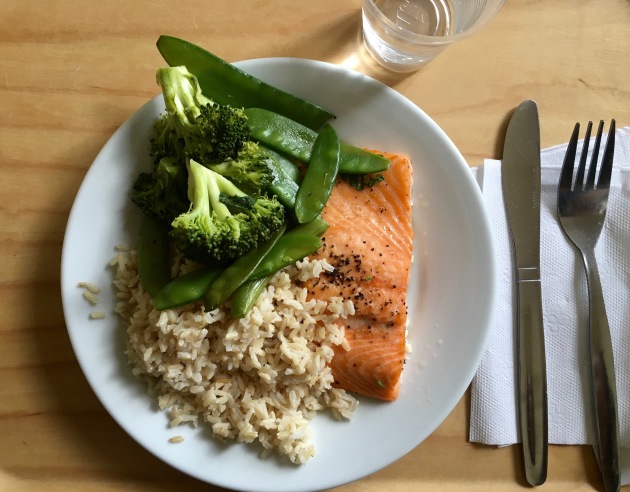 Then we had a scavenger hunt around the city centre (what they call downtown) of Dublin. Rachel told me that the Dublin transit system is horrendous, and she was right. I’m already terrible with public transit on the subways back in Boston and NY, but the Dublin Bus system makes me want to weep inside just a little bit.

Maybe by the end of October I’ll be able to understand it. They’re double decker buses though, which is cool.

My scavenger hunt group found a guy on the sidewalk selling these beautiful-looking strawberries for 3 euros, so we bought them to share. Our reactions: “HOLY **** THESE ARE THE BEST STRAWBERRIES I’VE EVER EATEN.”

So tender, sweet, flavorful, and fresh. I even ate the leaves because a) they were so small that I could barely hold onto the leaves, b) I didn’t feel like holding juicy leaves in my fingers, c) they can’t hurt, right?

Of course, we also chatted with handsome Irish musicians on the street. And they actually have angelic voices. 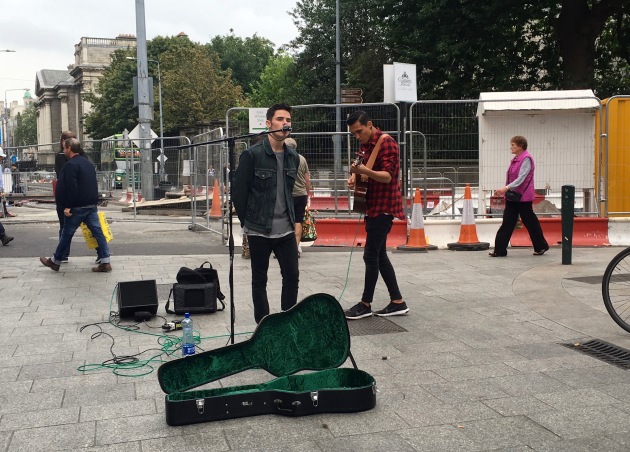 At the end of the scavenger hunt, a few of us ventured to get some new SIM cards for our time here in Ireland (data usage, huzzah!). And then I was again starving for dinner, which I made back at the dorm.

I snacked on a KIND bar while cooking up some chicken breasts, which I had on top of toast with white cheddar. Plus a salad and an unpictured peanut butter chocolate chip cookie that I brought from NY  (thanks, Aunt Tina!).

Confession: A lot of people are out at a club right now because our tour guide could get us all in for free this one night, but I didn’t want to pay for transportation for the fourth time in one day and I know I will have plenty of time to go out when I truly want to (not just because it’s free to get in. still need those dollas for booze ya know). PLUS, it was good to stay in with a couple of friends and help one of them out with room lockout issues.

I really want to do a wine and cheese night. Mostly for the cheese, but wine is good too.

Thank you to those who made suggestions for places to visit! I am very grateful for this experience. Dublin is seriously stunning and charming, and the people are so kind. I’m also meeting lots of new friends! I’m excited for what’s ahead.

When do you say “no” to going out?

Where are the best hidden gems in Europe? I’m trying to make travel plans and would love some input!

Hey there! I'm Alison and welcome to Daily Moves and Grooves!
Technical stuff: 24 years old, soon-to-be licensed Doctor of Physical Therapy in New York, Boston University Class of 2018 and 2020.
Fun stuff: I am the person who actually dances like nobody is watching, even when people are watching. I don't eat nut butter; I inhale it. I have a crooked pinky. I [strive to] love God more than anything else ever.
"Let them praise him with dancing" -Psalm 149:3