I definitely start a lot of my posts with small talk. I often like to talk about the weather, for example…

…but can we just…I was in shorts and a T-shirt all day yesterday. And WHAT is that next to Sunday and Tuesday?

But all this small talk is really just procrastination for what I really want to say (I have not told any of my friends or family about this, so you know it’s BIG and SCARY):

I’m working on a building a startup fitness company!

Moves and grooves have gradually become a bigger part of my life in the past few months, so this idea has been growing in my noggin for a bit. I believe I am at a very healthy place, mentally and physically, so I feel comfortable and empowered to take this on. Also, since I’ve become a Fit University ambassador, I’ve just had this inexplicable drive to integrate all my knowledge about physical therapy and eating disorders/fitness obsession and apply it to a holistic, supportive environment. I don’t want to divulge too many details since it’s still in the works, but I’ll be sure to share as the process unfolds.

WOW. LIBERATION. EXCITEMENT. Thanks for listening. Business things. Who would have thought?

Anyway, my friends and I have been rollin’ out the Easter celebration this whole week, despite real life things like laundry and school.

Rachel and I checked off another food bucket list place on Tuesday with Zinneken’s liege waffles for lunch dessert! Instead of going to the storefront, we stopped by the food truck that was closer to us. I cannot tell you how much this food truck has been torturing me with its aroma of sugar-coated waffles for the past month whenever I walked by.

Tuesday was the day. 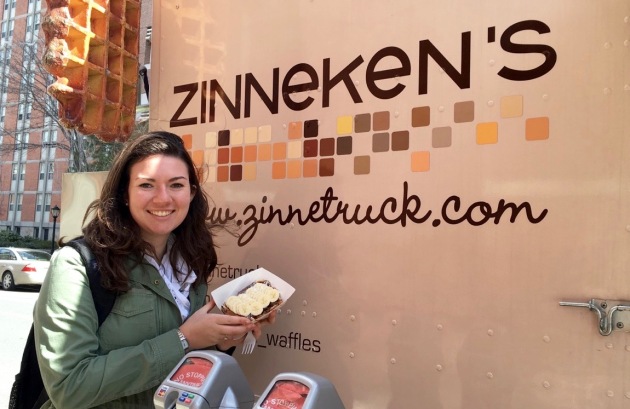 so beautiful (Rachel AND the waffle) 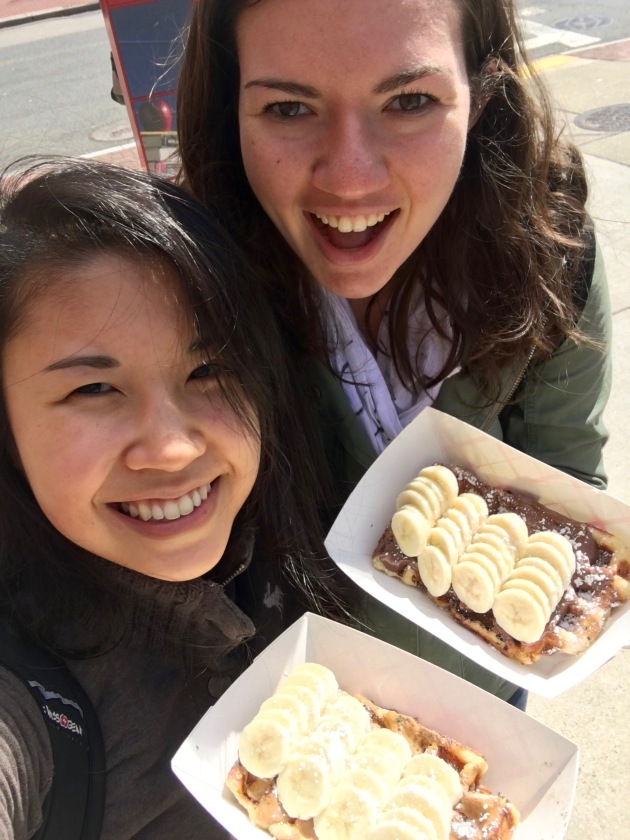 We bought our waffles, parked ourselves on a bench, and let all our fellow students watch us devour the crispiest, sweetest, most delightful waffles ever.

Other delicious foods from the d-hall this week: 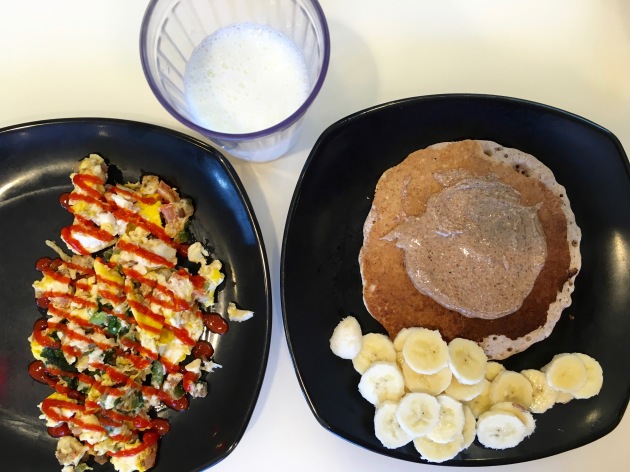 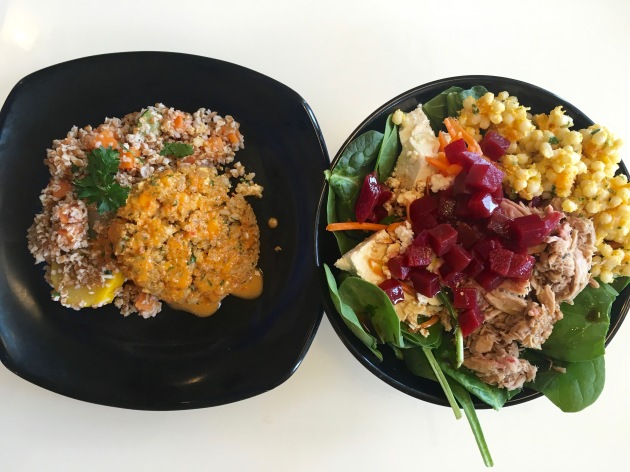 I’ve also had lot of amazing conversations with friends this week, which brings me to this week’s Five Minute Friday! This one’s all about personality:

link to the video!

*Note: After filming this, I reflected on my answer for abstainer vs. moderator, and I actually think I’m an abstainer when I’m more stressed, but I’m more of a moderator when things are going pretty smoothly. Is it cheating to say both?

Hope you all have a grand weekend! Also,

I am NOT starting a fitness company. I have no plans to do so. Sorry. 😀

DID I FOOL YOU? Please say yes. I never fool anyone.

Do you think you’re an abstainer or a moderator?

Salt or light (if that’s applicable to you)?

‘Tis April Fools’ Day, and I was thinking of playing a joke on you guys, but I knew it just wouldn’t fly. I was considering a few posts that would catch people’s eyes, but it’s inevitable that no one would believe me. Some of my ideas? Telling you that I got a tattoo, that I wanted to quit blogging, or that I was pregnant. Kidding about the last one. I was also thinking of telling my parents I got a new boyfriend, but I can’t keep a straight face for MY LIFE, so I did not attempt that.

I guess I was still feeling the effects of an exhausting Benefit week yesterday, so I decided to go home for a little nap after school instead of going to the gym. I was aiming for a short half-hour cat nap but…

Oops. I did not regret it a single bit though. It was glooooorious. I believe I could have slept a lot longer, but I didn’t want to mess up my sleep patterns too much.

In other news, Mother Nature was just as fickle and weird as me yesterday. She spit some sleet and snow on us in the morning, but then she gifted us with absolutely gorgeous sunny weather in the afternoon. I wish I could have exercised outside, but that nap was too sweet to pass up. Thus, my moves just consisted of the 100 challenge (except I doubled the squats to 200) and some planking.

Anyway, rather than joking around on this April Fools’ Day, I want to play a little “Two Truths and A Lie” with you all. If you’ve never done this before, I basically give you three statements about myself. Two are true and one is a lie, and you have to guess which one is the lie! My life isn’t that exciting, so this might be easy for you, but I think it’s a fun way to know some more fun facts about me (if you even care).

a) My uncle is a priest.

b) I used to do gymnastics.

c) I used to play the piano.

a) I’ve been to every continent besides Antarctica and Oceania.

b) I’ve moved three times in my life.

c) I’ve been to Hawaii at least 5 times.

a) My favorite color was once white.

b) I used to want to be a meteorologist.

a) I have a crooked pinky.

b) I can do a back handspring.

Second set: A. I wish I did kung fu though! I would be like a flying monkey.

Third set: A. I’m going to visit Arman Down Under one day. One day.

Fourth set: C. We used to have fish, but my mom killed them all accidentally when she cleaned their tanks with soap. One day they were happy, and the next day they were all floating belly-up. *Sigh*

Fifth set: B. Again, I wish I knew how to do a back handspring! And I hate somersaults because I have a very prominent first vertebra, so it hurts pretty badly to roll over it.

There ya have it! Perhaps you learned something new about me. Hope you all have a great Tuesday! Don’t trust anyone today. 😉

Two truths and a lie— I’ll guess which one is the lie!

Have you ever pranked anyone on April Fools’ Day? Have YOU ever been pranked?