I meant to write this, like, two days ago.

This is my week off and my days have already been full enough to not have time to blog. SCHOOL IS COMIN’!!

It’s been full of mostly fun things though. Example: Last night I went out to dinner with my good pal Zoe and her family at Sweet Cheeks BBQ. We ate al fresco in the cool summer eve, noshed on giant honey-buttered biscuits, and ate lots o’ scrumptious meat. I truly don’t deserve this life.

Rewind to…THREE weekends ago ALREADY. My friend Ben and I ran a Spartan Super race in western Massachusetts!

It was 8.2 miles of epic fun. Well, the first 2 miles were miserable for me. Running felt really difficult at the beginning, and after the first wall obstacle, I told Ben, “Not gonna lie, I feel pretty damn terrible.”

But somehow I caught a first wind at around mile 3 and felt great for the rest of it. I owe Ben a lot of credit for leading the way at the beginning when I just wanted to go back to Boston to sleep and for lending his knee to help me up all of the tall walls. And just for being the greatest Spartan buddy.

FAVORITE MOMENT OF THE RACE:

So at last year’s Spartan Sprint race, I was *this* close to reaching the top of the rope climb, but I didn’t know how to use my feet for leverage, so my arms became super fatigued. I was a pull and a reach from the bell, but instead I slid down and got a rope burn on my ankle (in front of many spectators) that I still had by the Spartan Race this year. Since then, I’ve been determined to complete the rope obstacle, buuuuuut I don’t know where to find a rope for practice, so I’ve never trained for it ¯\_(ツ)_/¯

Anyway, at the race this year, there were some Army men/women standing at the rope obstacle (idk, moral support?). I was struggling to even START climbing the rope, so I asked one of the Army guys, “Do you know how to do the foot thing to climb the rope?” Army man coached me through it, and after a couple of failed attempts, I finally got the hang of it and started my way up the rope. At half way I wanted to quit because I was already fatigued and felt like I wasn’t using my energy efficiently, but Army man said, “You’re halfway there, don’t give up.”

I kept inching my way up (literally like an inchworm), and when I was at about the same place as last year, I reached for the bell but missed. But I honestly had to just think of Jesus Christ on the cross (#dramatic but whatever, He’s always relevant) in order to not let go. So the tired leggies and the super tired arms did one more pull, and then I rang the bell!

…and then I slid down and rope burned the same part of my ankle as last year, except five times worse (it’s still scabbed and healing). And when my butt made its grand touchdown to the mat, I thanked Army man and all his friends as if they had just saved my life. It was a proud and humbling moment all the same.

had to assure people that I am safe and not being harmed by myself or anyone else; “it was just a spartan race”

Hardest obstacle: The bucket carry. It just felt so bad for my back, no matter how well I tried to maintain my body mechanics and use my core.

Honorary mention obstacle: Dead ball (maybe around 50-75# for the women?) carry with burpees.

The weather was overcast (which was actually lovely!) and slightly rainy towards the end, but everything was a cow-manure-smelling, soggy, muddy slip and slide. I almost ate it at least ten times. Monkey bar obstacles were complete fails, 30% due to the conditions, 70% due to my lack of grip strength.

Our post-race meal (besides the free banana/protein bar/electrolyte super water they gave us) was ramen and ice cream. A fine celebratory meal, I say!

We’re already thinking of doing another one next year.

If you didn’t know, my bff is getting married in a couple months, and she asked me to be the maid of honor ♥

This was just F U N. Part one was a surprise party complete with some of Rachel’s favorite foods, a gold fringe curtain, polaroids, booze, some G-rated question games (since pinterest bachelorette party ideas are really gross, tbh).

Then we went out on the town and danced up a STORM at a couple bars. We were living. Also, I learned that people are so dang generous and enthusiastic to bachelorette parties. Free drinks and hugs left and right, man!! Creepy men left and right, too, but we held our ground. 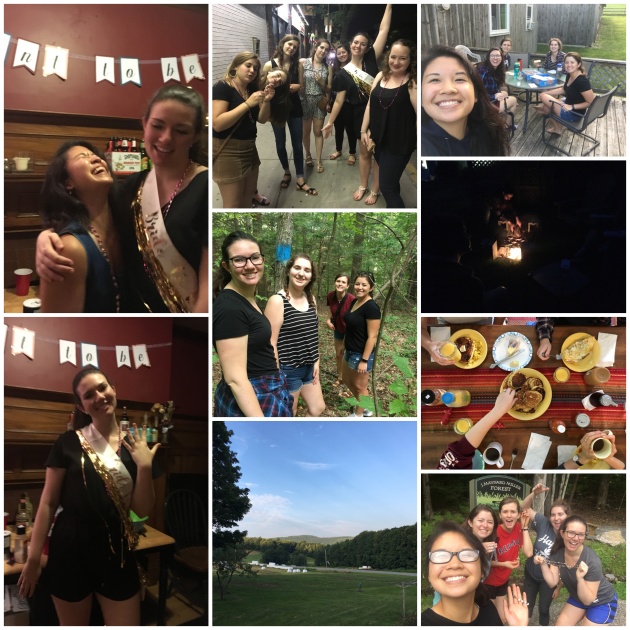 The collage obviously shows our ~tame~ side as well. Part two of the weekend was a quiet getaway to an idyllic farm Airbnb in middle-of-nowhere Massachusetts. Rachel requested this type of weekend for just her and her bridesmaids, so we delivered! It was wonderful in every way. The Airbnb hosts were great (we stayed here — highly recommend if you wanna stay on a peaceful farm lol) and sold us a whole fresh chicken that we roasted for dinner. They even set up a bonfire for us, which we used for s’mores at night as we chatted under the intensely bright moon.

Ugh, it was just phenomenal. It was “glamping”, essentially — all the perks of camping without having to sleep outside nor deal with camp stoves.

Most importantly, Rachel loved it, so it was a successful weekend 🙂

School starts on Tuesday! Hope you all have a delightful weekend. Do we feel that fall air coming on yet!?

Have you ever done an obstacle race before?

Have you ever been to a bachelorette party?