There’s a lot going on in the world right now, but a little bit of pizza, pasta and Pope Francis never hurts (unless you’re gluten intolerant).

Where did I leave off in part one of Rome adventures? Saturday!

I woke up early-ish again to meet another one of my seminarian friends (stop rolling your eyes), Kevin. We broke the fast with cornetti again as we caught up on a bunch of stuff. I hadn’t seen Kevin since I was in high school in New York!

I could get used to meeting people at St. Peter’s square in the morning

What I can’t get used to is finding people in St. Peter’s square mid-morning. I didn’t agree on a specific spot in St. Peter’s to meet up with Megan and Ceara after I had breakfast with Kevin, so it was like real life “Where’s Waldo”.

Eventually, Megan and I ran into each other amidst the sea of people, and we were reunited. Ceara’s friend, Sonja, joined us for the day too! We bravely decided to tackle the long line for the Musei Vaticani. The bravery is mostly for facing all the people who harass you to buy tickets to skip the long line into the museum.

The wait wasn’t horrible though! Maybe an hour tops? That being said, the museum was absolutely packed. I feel like the whole museum is really just one giant line to get into the Sistine Chapel.

The art is magnificent, don’t get me wrong! I’m happy that we got to see all the great artists’ works through the centuries and millennia. 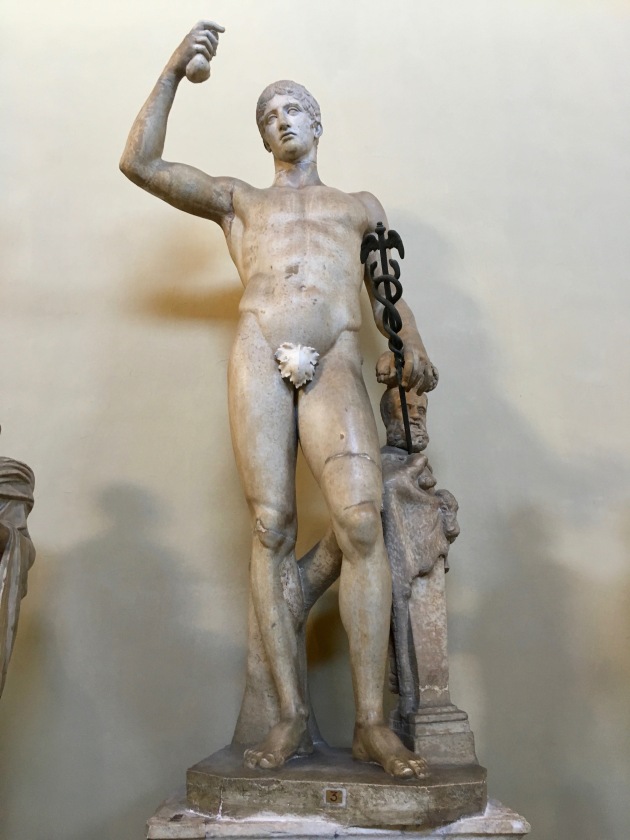 But let’s just say… I’m glad we got student discounts on our tickets. It’s a lot of stimulation with all the people and intricate artwork, and if you’re claustrophobic, skip this museum.

After a good few hours at Musei Vaticani, we were ready for lunch. Specifically, pizza. Ceara led us to a great place called L’isola di Pizza (The Island of Pizza), which sounds cheesy (no pun intended), but their pizza crust was the BEST.

I went with the classic combo of cheese, tomato, and basil (it was different from the margherita though?), and although I wish it had more basil, I totally demolished this. That thin, crispy crust was everything.

Then it was time to walk walk walk in the beautiful weather yet again! 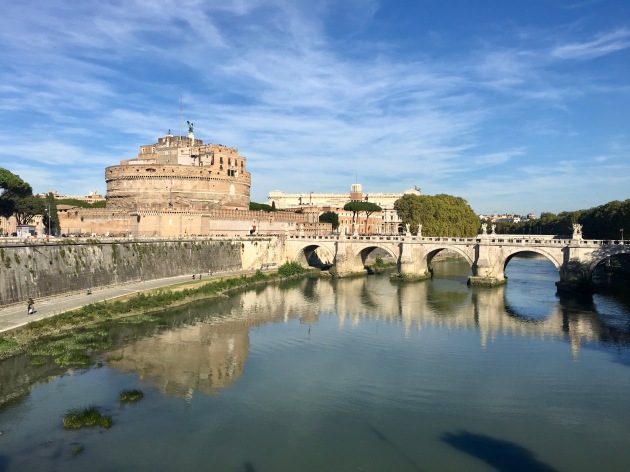 This was my favorite cup of gelato of the entire trip.

We took the bus to The Basilica of St. John Lateran and La Santa Scala (the Holy Stairs on which Jesus was condemned that were somehow removed from Jerusalem and brought to Rome by command of Constantine’s wife??), where we spent some time looking around and climbing the stairs on our knees while praying in remembrance of His condemnation. 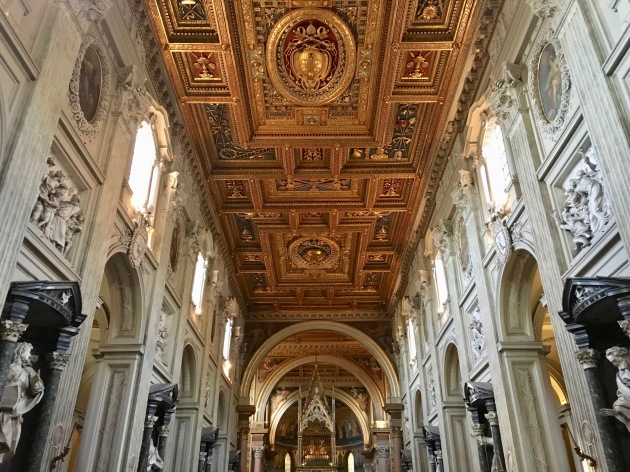 It’s weird that I “got used to” this kind of view whenever I entered any church in Rome.

We took our time walking back up towards dinner, stopping by the Colosseum again to chat and watch the sun set. 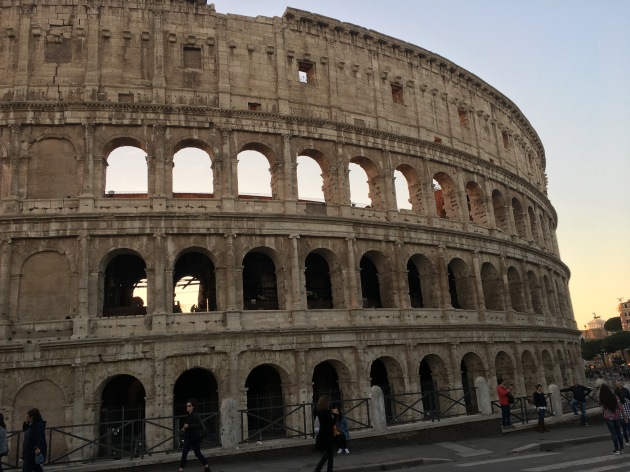 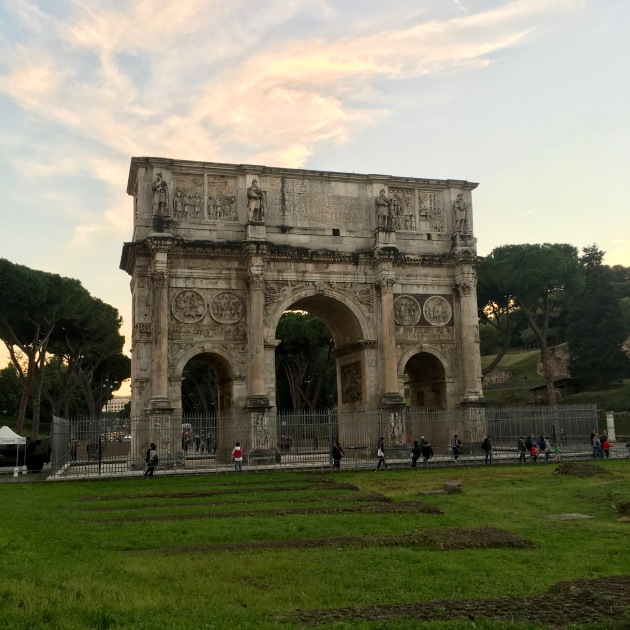 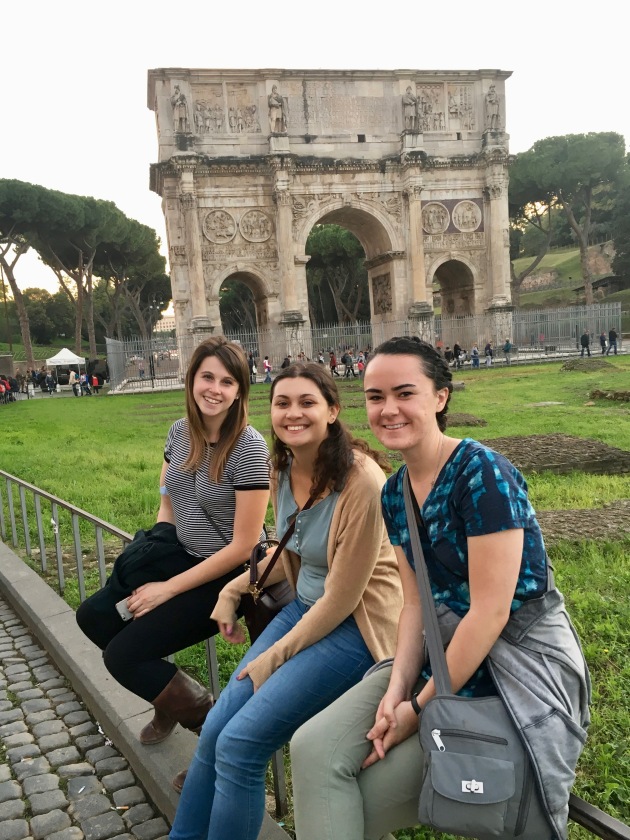 It was fun chatting with the girls about faith agreements/disagreements and cartoon crushes as we strolled through ROME. Agh, that will never not be cool to me.

Eventually, we made it to a place that Denis recommended for dinner called La Vittoria. I wasn’t crazy hungry, but I still wanted pasta. This might have been my favorite pasta that I ate in Rome (but second best pasta in all of Italy after the gnocchi in Assisi)— spaghetti with spicy tomato sauce, bacon, and hazelnuts. I think I had a salad before this, but that’s not as exciting as pasta.

It doesn’t look that great from the photo, but I promise it was. The bacon added a lovely smokey flavor that made my heart sing (probably cry too, but…). We stayed at the restaurant until it started closing up, which was the longest we had stayed at a restaurant during our whole trip. #TheEuropeanWay

The next day, Ceara, Megan and I had a light-ish breakfast of two last cornetti per person. We basically had to, because our Airbnb host gave us vouchers for free breakfast at a nearby cafe every morning. If they insist, ya know? 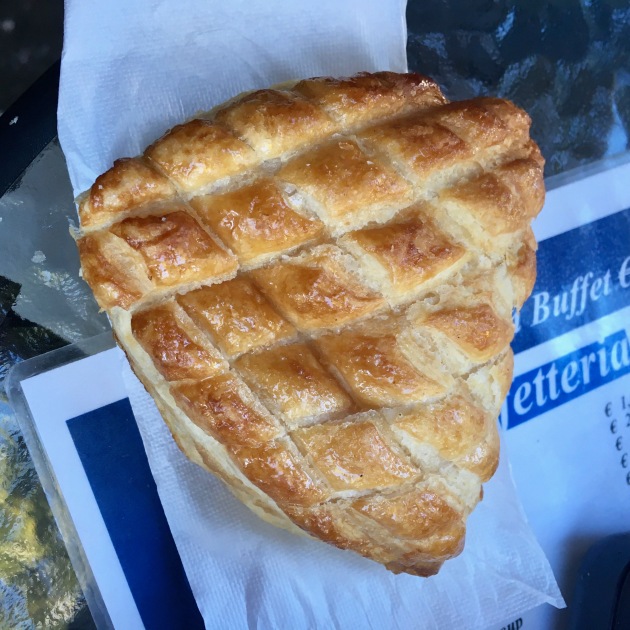 this one was filled with custard, not gonna keep any secrets here

and this one had a touch of apricot jam on it 🙂

After a little time to digest, we walked over to a church just outside Vatican City for Sunday Mass.

Not only was the Mass in English, but the priest who celebrated, Fr. Gino, was from New Jersey (go northeast and tristate area)! He actually came up to us right before Mass started and asked us where we were from. He then proceeded to start the Mass and gave Boston University a shoutout in front of the whole congregation! It was no papal audience, but we were still super honored and excited.

Sonja met up with us after Mass, and we all squeezed our way into St. Peter’s square to see a special someone… 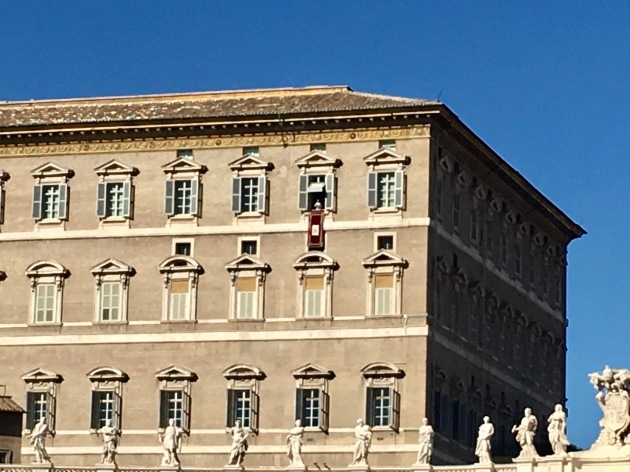 CAN YOU SEE HIM!?

It’s your boy, Papa Francesco giving a sermon on the readings of the day and praying with all the people gathered in St. Peter’s square, which he does every Sunday at 12:00 pm when he’s in town. We were so happy to see him!!

I knew he’d look small being so far away, but I didn’t think he would be that small. His voice was amplified though, so we got to hear his tender, grandfatherly voice. I just wanna give him a hug.

Afterwards, we slowly waddled our way through the crowds to get to lunch at Da Vito e Dina. Megan split a supplì (fried rice ball with cheese inside) with me because I had been hoping to have arancini at some point during our Italy travels, so the supplì was the closest match on our last day. Good choice.

For my last pasta dish in Italy (*tear*), I had the seafood gnocchi, which was very salty but very delicious.

For our last gelato run, we chose Old Bridge, which is what one of my other seminarian friends recommended back from the States. The quality of the gelato was just as good as Frigidarium, but I think I liked the flavor selection at Old Bridge better. HOWEVER, I still liked my second Frigidarium experience best of all. 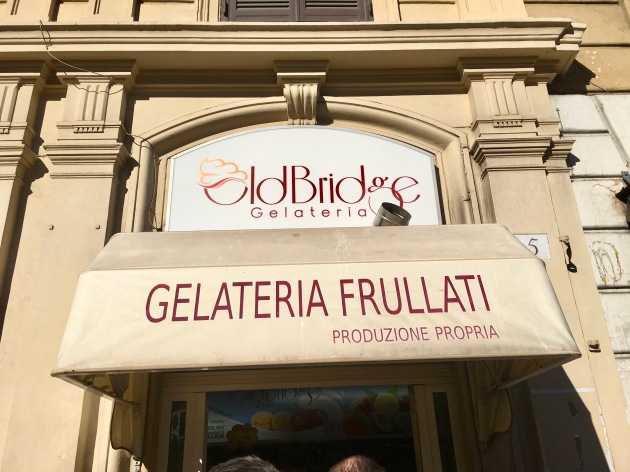 At the end of the day though, it’s gelato in Rome, so I couldn’t lose. I got the biscotti, arachidi (peanut), and coconut biscuit flavors. All so good! And again— €2 for three flavors. I weep coming back to Ireland/the US.

After our last meal in Rome, we walked towards a park for some last views of the grand city. 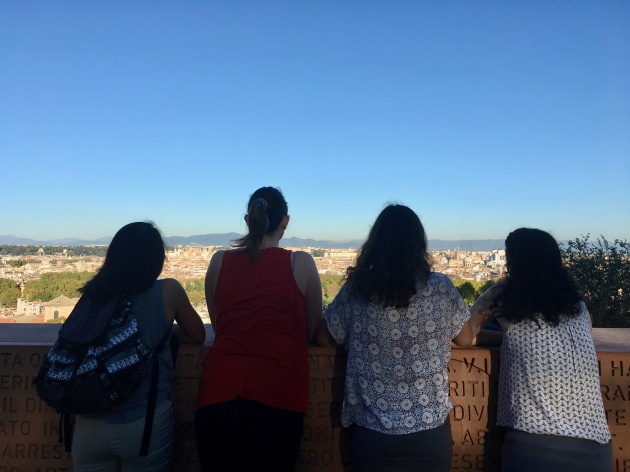 Sonja and I also got our yoga on! 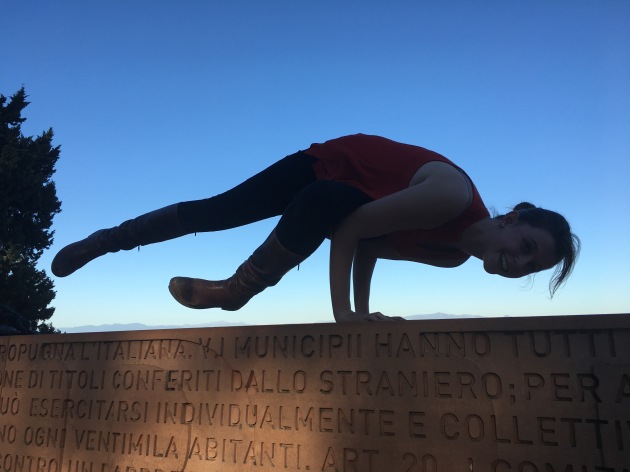 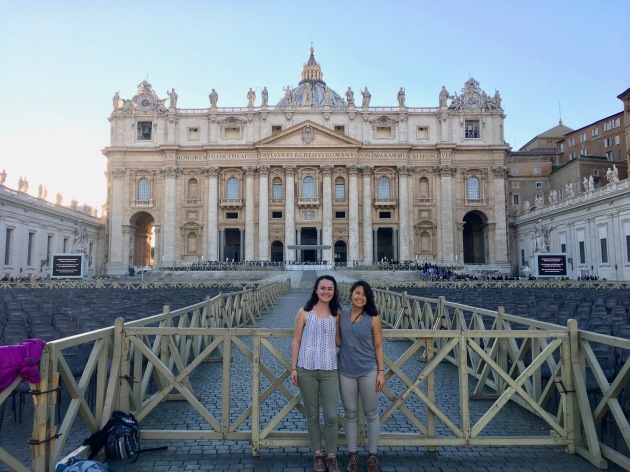 Then it was time to get our bags from the Airbnb and head to the airport. It was a little stressful finding the bus from the train station to the airport, but we eventually found out what to do after some flailing and confusion.

My airport dinner was a decent vegetable sandwich.

Our flight was filled with rowdy Irish tweens, but I made my first Irish friend! He’s super tall, well-read, and 17 or 18 years old. Haha.

Since then, we’ve been back in Dublin doing our internships and continuing some class work. I’m SO BEHIND in catching you up, but I have officially finished reviewing the most epic trip of my life.