This is the story of the longest 7.5 miles ever. 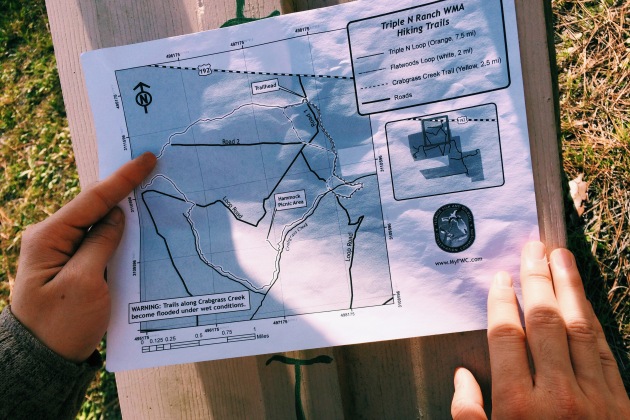 Yesterday, Brother Ben and I faced the 7.5-mile orange trail called the “Triple N Loop” at the Triple N Ranch Wildlife Preserve. The hike turned out to be one of the most challenging hikes I’ve ever done. It wasn’t the most physically demanding hike I’ve done (Florida has zero hills) , but it was mentally demanding with all the natural obstacles involved.

It all started peacefully on a flat, open field, much like the one on our Disney Wildlife Preserve hike last week. At this point, Ben told me that the trail was labeled as “moderately difficult.” I thought, hm…that’s an overstatement. 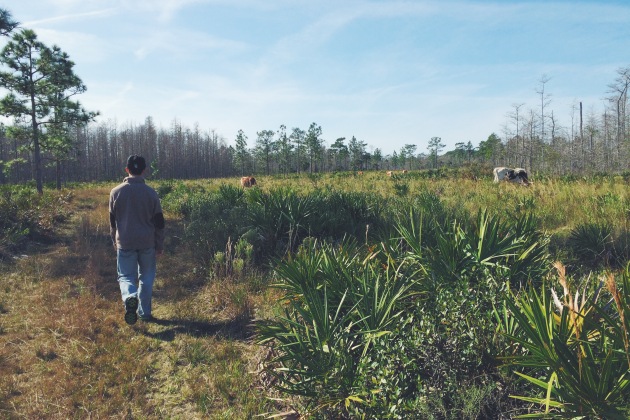 We came across some cows at the beginning, as you can see in the photo above. They were pretty big and donned some decent-sized horns on their heads, but they were very scared of us. Within a few minutes, the whole herd disappeared from our sight.

They did leave their mark on our path with abundant cow pies, and I was lucky enough to step on a fresh one. Yaaaaaay.

Stepping in cow poop was only the beginning. Approximately 1.5 miles into our hike, the trail led us into the forest. The terrain completely changed from flat, solid, and dry to bumpy, unstable, and soggy. It still wasn’t bad at all initially though. It was a fun adventure!

All smiles before I knew what was coming

My first issue was running into a bunch of spider webs and flailing around like a freak, but that’s just because the feeling of spider webs on me gives me the heebie jeebies. As we went on, the earth beneath us became more soggy and muddy as we approached the creek. Several times throughout the hike, we had to find ways to jump over the creek in order to follow the trail.

There were also a ton of huge palm bushes, which had baby thorns woven all throughout. Ouch.

I had the expectation that the trail would run through the forest for a mile or so, and then we would be led back to the open field again. Not so, Alison, not so. I started to get hungry and frustrated when the trail kept on leading us through mud that nearly sucked my shoes off, thorny bushes, and dead, fallen trees. It was cute to feel like Katniss at first, but then I started to get irritated.

At one point— which happened to be at the peak of my frustration— we had no choice but to go ankle-deep in muddy water since there was no dry land surrounding the “trail.” I was whining and pouting like a 5-year-old.

After getting a free mud mask for my feet, I calmed down and told Ben that we should break for lunch. 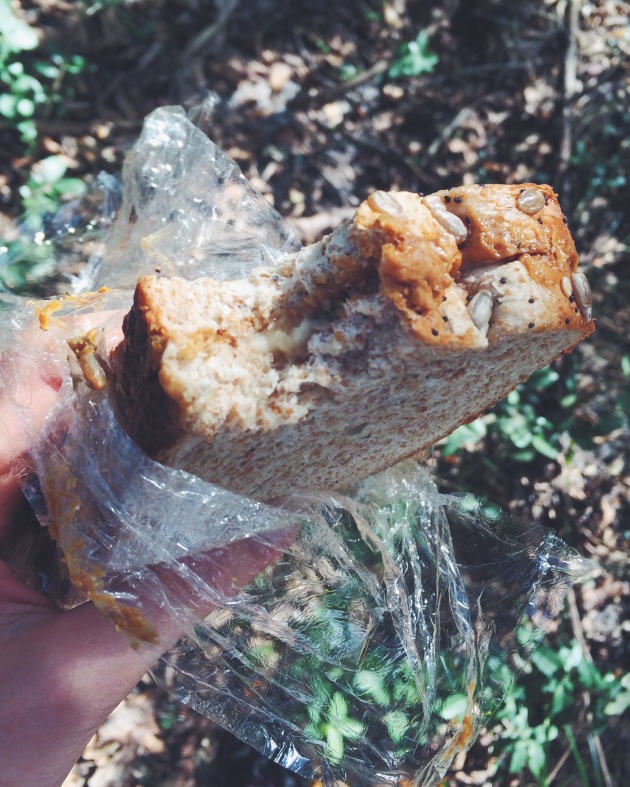 I packed peanut butter, banana, honey, and cinnamon sandwiches for both of us, which definitely gave me the brain power to be a little more mature about this hike. I mentally prepared myself for a more challenging and dirty hike than I anticipated. After that, I was ready to go all in.

Does anyone know what those little tree stump spikes are? They look cool and creepy all the same.

We kept trucking along through thicket and thorn, and my feet still got completely soaked a couple times, but I was fine with it after I finally accepted that this hike was indeed rugged.

Towards the end of the forest portion of the hike, the scariest thing happened.

We were walking through the forest, following the trail, when all of a sudden…

This was no chihuahua-sized growl. This was a deep, bellowing, menacing growl. Like the kind you might hear on the Jurassic Park ride at Universal Studios, except this was totally real.

Ben and I looked at each other with big eyes and, without saying anything, quickly walked away from the growling sound that we were just about to approach. All while still trying to follow the trail and not fall into muddy pits.

My heart was pounding and I kept thinking, Lord help us. We just need to keep moving and get away from here NOW.

When we made it back to the open, flat prairie land, I never felt more relieved to see grass in my life. Ben and I didn’t talk about the growl in the moment when we heard it, but later I was like, “sugar honey iced tea, that was scary!!!” We didn’t see the animal, so I thought it might have been a bear that made the sound, but Ben convinced me that it was probably a giant alligator since we were in such a swampy zone.

Also, this video of a growling alligator matches the sound we heard almost exactly.

Anddddd then we were smooth sailing after that ordeal! Praise God. 7.5 miles in 4 hours. 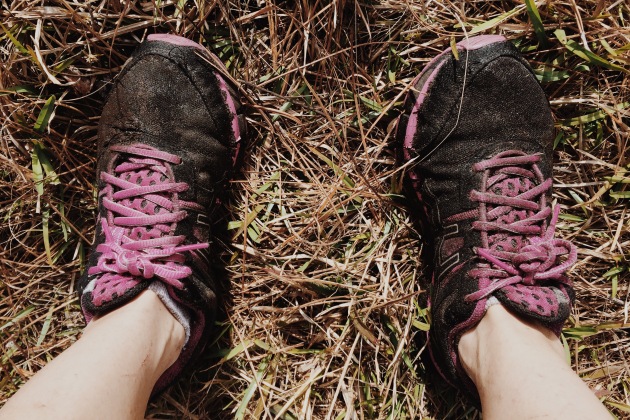 Ben also told me in the car after the hike that he saw a gigantic yellow-brown spider sitting on its web (with a full-sized dragonfly caught in it) right in front of us while we were eating lunch in the forest, but he didn’t want to tell me at the time since I would probably freak out. Smart move. I would have utterly died if he told me when it was right in front of us.

Speaking of not being judgmental of your own hunger cues (in yesterday’s post), I was a bottomless pit after our hike. I ate one snack after the other, even though my brother didn’t seem hungry at all. ‘Tis what ’tis!

We hosed off and showered at home, relaxed, and then joined my cousins for a super late dinner at Bento Cafe. I had a delicious sushi salad with salmon, yellowtail, and eel on top. 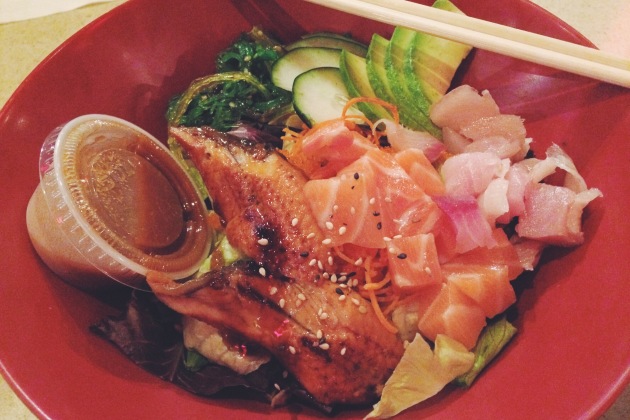 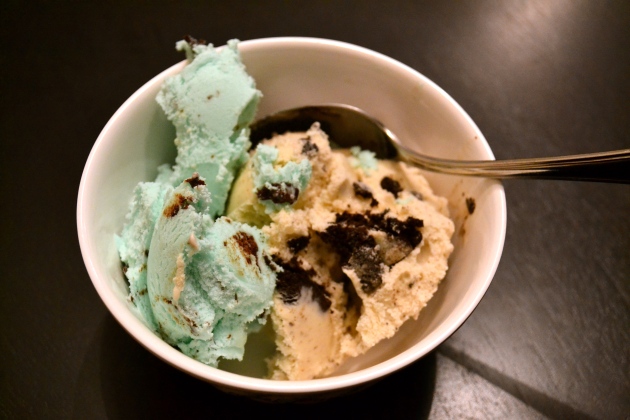 I’ll be having a spa day with mom today! Quite a contrast from yesterday, eh?

Hope you all have a fantastic Friday! Don’t get eaten by a wild animal.

Have you ever encountered a frightening wild animal?

What was your most challenging hike?