…Because our AC isn’t working and it finally hit 80F in our area this weekend. I mean, I guess I’ve been wishing for heat since the black hole of winter seemed to take forever to leave us, but I’m not a fan. I just WANT a fan. (I’m over-exaggerating. It’s really not that bad at all— I get to sleep without a blanket and I don’t have to dry my hair!)

Besides that, my weekend was pretty darn marvelous!

Check out all the marvelousness of Monday over on Katie‘s blog!

For this weekend recap, I’m gonna tell you all the fun stuff that happened as usual, but I’m also going to let you in on a few secrets about each thing. Consider it a trip inside my noggin (remember when I was pondering calling my Thursday thoughts posts “Loggin’ the Noggin?“). That is, if you even want to go into that weird place that is my brain.

Dance company auditions for the 2014-2015 company were on Friday, and even though current company members do not have to re-audition (and senior company members are leaving for college), we all still attend and do the audition class to set an example for the potential incomers. I think it went well for everyone!

Secret about the audition: A lot of girls dancing together in a stuffy studio = STINKY. It was a little tough to breathe in there sometimes, not gonna lie.

In the evening, I went to go get ice cream with my friend Michael (my super cool prom date)! We had a nice time chatting about college and such. We also went to the grocery store next door so I could buy bananas, because I need more spotty bananas in my life.

Secret about this ice cream: It’s “almond cream” Italian ice, and I was kinda disappointed because I really wanted creamy gelato instead.

Secret about when I got home: I ate a spoonful of peanut butter.

On Saturday morning, company had a quick and low-key dance rehearsal for a show coming up in June.

Secret about the rehearsal: I was practically falling asleep because those dance studios are like saunas.

When I got home, I ate lunch and made these “Carrot Spice Scones” from a box mix my mom bought from Bed, Bath, and Beyond for $1.50.

Secret about this “scone”: The package falsely advertised these as scones, because they were WAY too fluffy to be scones. These were more like muffin tops, which isn’t a bad thing at all. 🙂

Breakfast in bed for my beloved mother! She is obsessed with all things coconut, so I was basically obliged to make her something coconutty. I decided on coconut-crusted cinnamon raisin French toast for the queen. 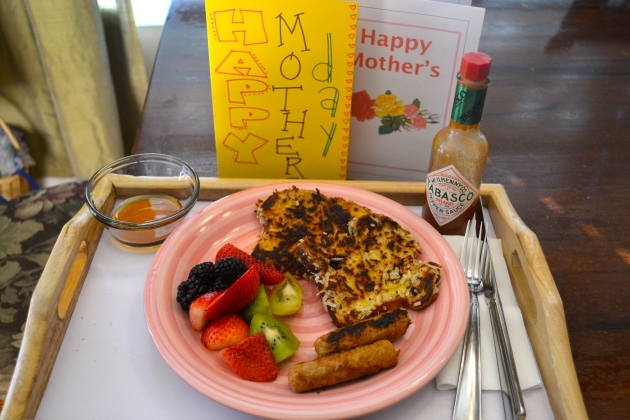 Secret behind this breakfast: I only made one thing on this plate— the French toast. My dad cooked the turkey sausage and my mom had cut that fruit a few days before. Heh.

I made some French toast for myself as well while we were at it. I topped mine with Greek yogurt, peanut butter, seared banana slices, and maple syrup. Glass o’ soy milk on the side.

Then, since I went to bed super late on Saturday night and woke up early to make breakfast, I took a super long nap on the couch. It was gloooorious and it got me energized for some outdoor moves. I was really in the mood to jump rope, so I completed Julie’s Jump Rope + Lower Body Workout with just bodyweight.

Secret about working out outside: Since I was using my phone as a timer, I left it out on the mat under the sun, which resulted in my iPhone getting a short fever.

I also practiced double unders (which I showed off on Instagram)! They’re my new favorite thing to do now (behind burpees of course).

Secret behind the double unders: I got lucky with this shot because this is probably the most I got in a row all day yesterday. I’m still happy I can do them though!

Hot weather means SMOOTHIES, so I had one of the green (and very nut-buttery) variety for lunch: 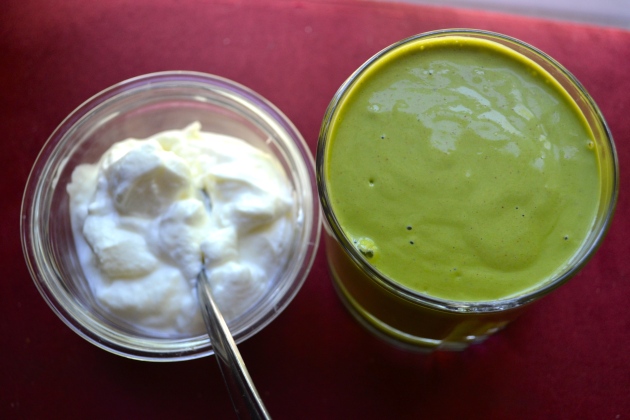 With Greek yogurt on the side of course!

Secret behind this smoothie: This plus a ton of water and a bunch of crackers with hummus gave me a food baby.

After a few more hours of homework and procrastinating in the form of Instagram stalking, we headed out to dinner at a Korean/Japanese restaurant! Guess what. No Groupon this time. :-O

Traditional Korean side dishes that came with my dad’s meal 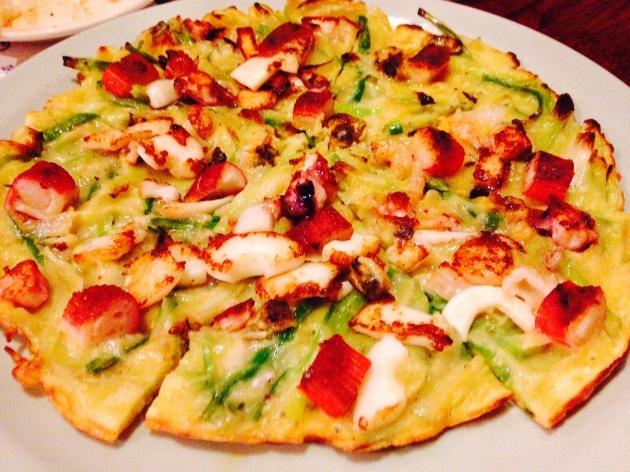 My eel and tuna rolls

Secret about dinner: I made the mistake of wearing pants that are getting too small for me. You can probably guess why that was a problem.

Secret about what I’m doing right now: Watching Fantastic Mr. Fox — one of my favorite animated movies ever.

And those are the secrets of my life from this weekend! I hope you’re not too mind-blown by my exhilarating life.

Hope you all have a lovely Monday!

Did you go outside this weekend?

What did you do yesterday?