Man, I feel like I haven’t been a part of the blogosphere much at all in the past few days. Schoolwork, dance, and the usual engagements have kept me on my toes, that’s for sure. Nothing to complain about though 😉

I’m feeling the “confession” style post today to recap my weekend. I did one of these a few weeks ago, but since I always love reading about others’ deep, dark, treacherous secrets, I thought I’d share some of mine again! Just kidding, these confessions are about things like food and more food.

Because fun confessions are marvelous 🙂 Thanks for hosting, Katie!

I played Cards Against Humanity, which is “a game for horrible people,” so that’s that.

If you’ve never played it before, it’s basically super inappropriate Apples to Apples. I was at my friend Pam’s house with all the other senior girls in company, and we definitely got some good laughs out of this game. Should I feel grimy? Because I kinda do after playing that game.

I had breakfast for dinner on Friday night because Fridays require abstinence from meat, but also because I was lazy to cook fish.

I ♥ eggs. Just get me chicken coop, and my protein (and cholesterol) will be set for life.

I took a picture of this at the dentist office: 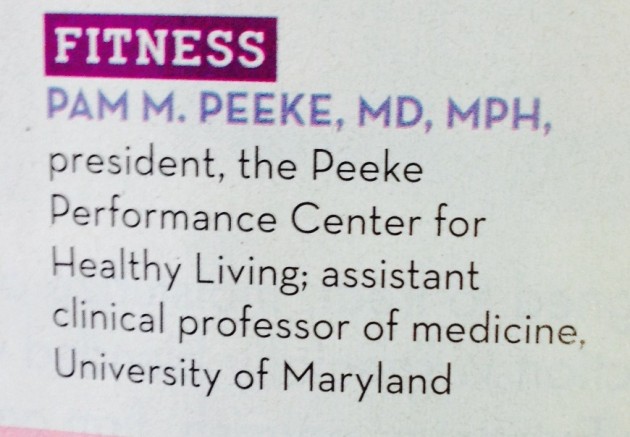 I was just excited that the fitness columnist for this Prevention magazine is from University of Maryland. Possible career involving writing + fitness?!

I packed an eh lunch for dance on Saturday. It was either the somewhat dry chicken or the questionable feta cheese. Or maybe I just really wanted a grilled cheese instead.

I kinda died over this pool of crunchy peanut butter on Sunday morning.

I had to melt it in a small bowl in the microwave first because for some reason, crunchy peanut butter stiffens up in the fridge a lot more than other nut butters. But that just means it became warm and fantastic in the microwave. Swoon.

Instead of being fueled by Popcorners at dance yesterday, I was fueled by string cheese and pita chips with hummus.

A LOT more pita chips. Plus another half of my friend’s string cheese.

Me: “We shouldn’t just waste a cheese stick.”

Dance was pretty much a high intensity workout yesterday. Rehearsal involved running our 13-minute piece straight through a couple times, and all of us were definitely fried by the end of the day. I feel the soreness already.

I’m so spoiled by Mom’s cooking. Now that she’s on vacation, I’ve been having to step up my cooking game, which isn’t nearly as finessed as her’s.

Exhibit A: I had to text her to ask how to cook pre-packaged gnocchi. Before you laugh at me, I know how to cook pasta and I know how to read directions. It’s just that a) I’ve just never cooked gnocchi before, so I wasn’t sure how long I was supposed to boil it, and b) Mom the space-saver threw out the box for the gnocchi, so there were no directions. It’s a good thing I asked her, because it only takes three minutes to cook! If I hadn’t asked, it may have been gnocchi soup for dinner.

Instead, it was a simple, yet tasty dish. I used a jarred sauce, but I upped the veggie power by adding broccoli. 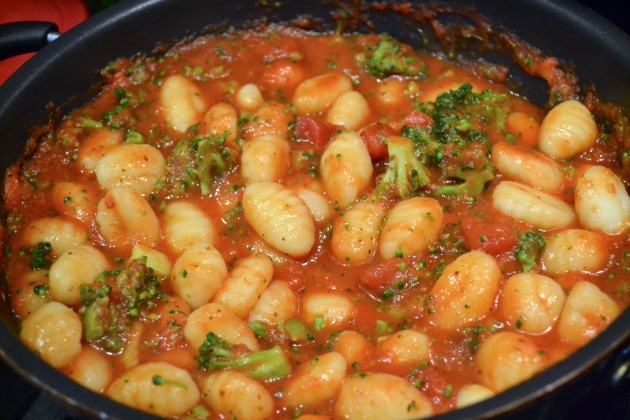 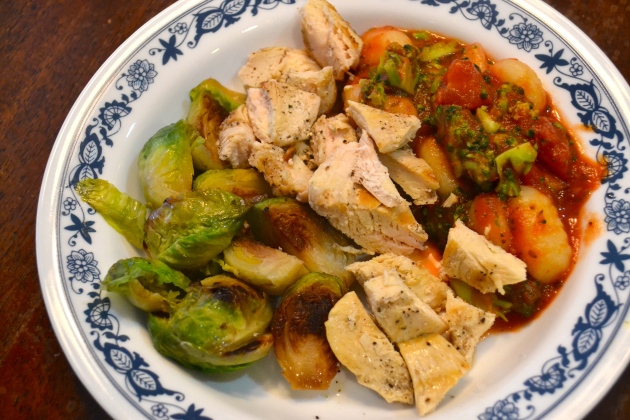 I had the gnocchi with leftover grilled chicken and brussels. I seared up some roasted red pepper spinach sausage for dad.

I made tuna salad sandwiches for meatless lunch options this week. 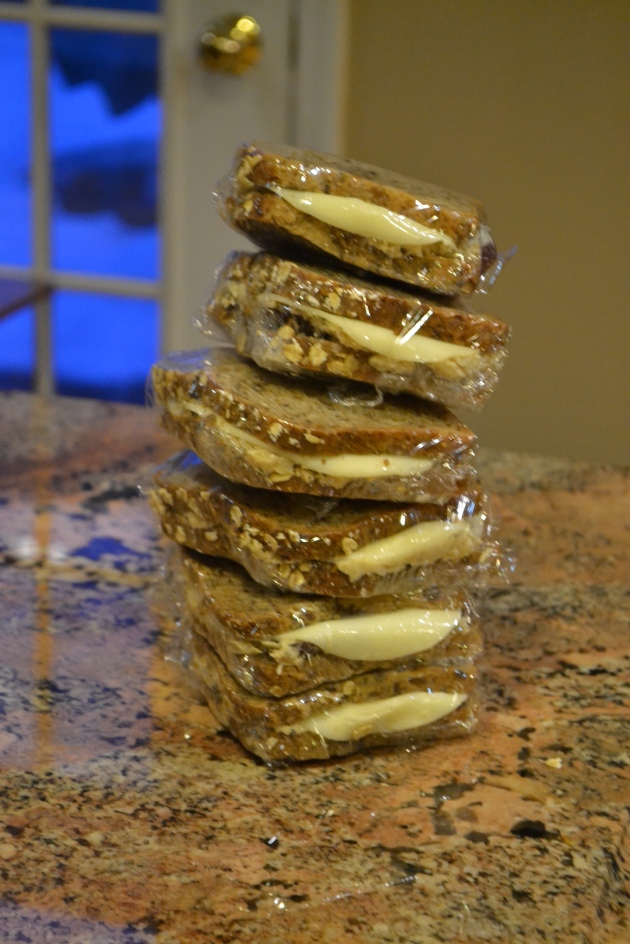 That’s not really a confession, but eating tuna salad doesn’t sound too sexy.

I finished two tubs of Greek yogurt in less than a week. By myself. It’s an addiction when two tubs are right next to each other in the recycling bin.

Mom and I send those chubby Facebook stickers to each other to represent how our days went.

I could be doing bio homework right now, but I’d much rather be blogging. I did half of the homework, and it’s due Wednesday anyway…. 😀

Hope you have a wonderful day!

What was the best dinner you had this weekend?

Have you ever played Cards Against Humanity?

What is one food you go through in the blink of an eye?

Any other weekend confessions?